Two weeks ago my husband and I were visiting my daughter and her family over the weekend. One morning I had driven over to the nearest grocery store for a couple of items. When I stepped out of the grocery store door I found a penny at my feet. I smiled and picked it up. When I was driving back to my daughter's house I noticed a license plate on a car in front of me. I was behind this car all the way into my daughter's neighborhood. The license plate read AMZNGC (Amazing Grace). The timing of this and the message was so significant for me.

For the past three art classes I've gone to this month I've been working on something that turned out to be very challenging. I've been working on an image transfer of my son. I printed out a black and white photograph of my son onto art paper. The problem was that not all of the image transferred when I peeled the paper away. I don't have any art training and I had to draw and paint in so much of Graham's face. I wasn't sure if I'd ever get it right. I couldn't have without my art teacher's help. I decided to use some lines from a very special poem of mine, "Heart-Song," for the border with some musical phrases from "Amazing Grace." I also added some eternity spirals and a feather! I was able to finish it yesterday. I am happy with the painting now. It's different with the blue and sparkling gold highlights. Grace has come to have profound meaning for me. I sign my artwork as Gracs. That is combining the first three letters of my son's name with the initials of my name. I feel that Graham is guiding me on this new journey. You can see why I was so amazed to see this license plate. 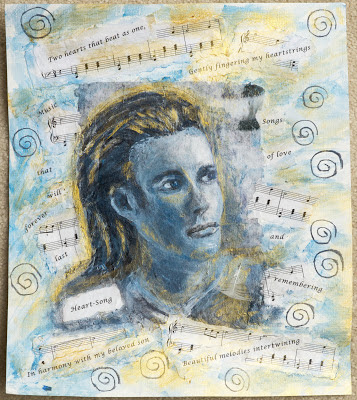 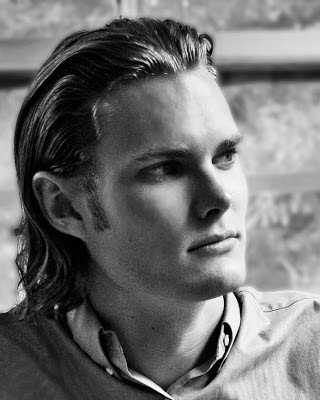 The haunting strains,
Of love’s sweet refrain,
Softly play,
Throughout my days.

Beautiful notes of memories past,
Music that will forever last,
Up and down the distant chords,
Remind me of times adored.

Beautiful melodies intertwining,
With love and joy realigning,
Two hearts that beat as one,
In harmony with my beloved son. 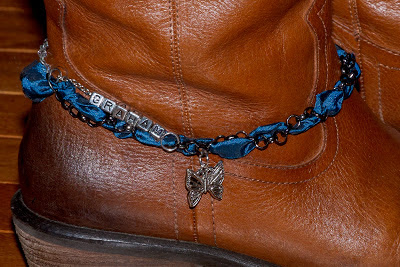 Cindy Adkins has a wonderful facebook page called Angels at My Door https://www.facebook.com/AngelsAtMyDoor.  Cindy is also an author of some great inspirational e-books and a talented digital artist.  I just received this beautiful boot bracelet that she made for me.  I love having Graham's name and the butterfly on it.  I think it's very special.  Here is the link to her blog with the ordering info if you would like to have a boot bracelet made.
http://angelsatmydoor.blogspot.com/2013/02/cross-boot-bracelet.html
Posted by Claire Ann Stevenson at 7:11 PM No comments:

This is an archive recording of an interview Pamela Marie Edmunds conducted with author Bill Guggenheim.

Tonight your Host and Medium Pamela Marie Edmunds will have Author Bill Guggenheim as her guest.  They will be discussing his book "Hello From Heaven" and After Death Communication.

Bill Guggenheim is a pioneer in the field of After-Death Communication (ADC) experiences. He is considered to be the "father of ADC research” and has written and spoken on this subject for 25 years.

Bill and his former wife, Judy Guggenheim, founded, defined, researched, and named an entire new field of human experience that may be as old as mankind.  They called it “After-Death Communication” and published their findings in their bestselling book, Hello From Heaven!  From 1988-1995, they interviewed 2,000 people and collected more than 3,300 firsthand accounts of people who had been contacted by a family member or friend who had died.  Bill and Judy conservatively estimate that at least 50 million Americans, or 1 out of 5 people, have had an ADC – though the numbers may be closer to double these figures.

Bill is a member of the Association for Death Education and Counseling (ADEC).  He presents workshops at conferences and local chapters of bereavement support groups, hospices, churches, colleges, bookstores, and many other types of institutions.  His ADC research and Hello From Heaven! have been featured on television (including "20/20" on ABC) and radio (including “Coast To Coast AM with George Noory” twice), and in numerous newspapers and magazines throughout the United States and Canada.  Bill does not accept any payment for his ADC work – this is his “ministry.”
Posted by Claire Ann Stevenson at 8:16 AM No comments:

I wrote this poem a few years ago for my son for Valentine's Day.  My husband combined the poem  with a picture of ours to use as the header for February on my facebook.   Happy Valentine's Day, Graham.  Love truly is forever.  Kisses and hugs to you in Heaven. xoxo
Posted by Claire Ann Stevenson at 7:33 PM No comments:

The Grief Toolbox shared a beautiful personalized garden flag on their facebook page. You can have a picture of your passed loved one put on it.  I think this is very special. I am going to order one with my son's photo on it.  Here is the link for ordering- http://thegrieftoolbox.com/products/butterfly-garden-flag-0
Posted by Claire Ann Stevenson at 10:05 PM No comments:

Dance With the Divine Print 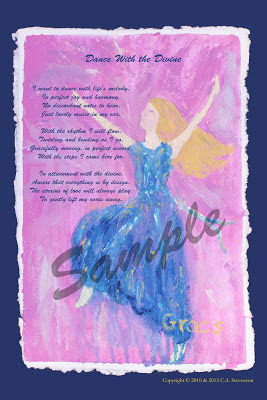 I combined my Dance With the Divine poem with the painting I did of a dancing woman and had a print made.  When I posted the print on my facebook page several people commented they would like to buy one.  I have had more prints made and now have them available for sale.  This poem and painting are from my heart.  I am delighted that it speaks to the hearts of others. May we all dance with the divine.

Here is the information to order if you are interested.  The print measures 12x18.  It is on heavy art paper and is suitable for framing.  The price is $22.40.  This includes the cost of domestic shipping and handling (there would be a higher shipping cost outside the U.S.).  To order, send an email to amotherstears@gmail.com with your address; we will send a PayPal invoice to your email and you can pay using a credit or debit card (this works even if you don't have a PayPal account) or, if you have a PayPal account, you can pay using that.  We'll ship the print once payment has cleared.
Posted by Claire Ann Stevenson at 8:51 AM No comments: 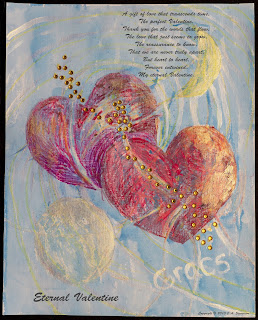 On my new venture into art I recently had fun creating this mixed media piece.  The other day I thought that my Eternal Valentine poem would be great to add to it. Luckily, my husband knows how to use photo shop and we were able to do this.  I love the combination.  I am sharing this with love for the month of February.   A month that is all about love and hearts and Valentines. ♥
Posted by Claire Ann Stevenson at 8:17 AM No comments: 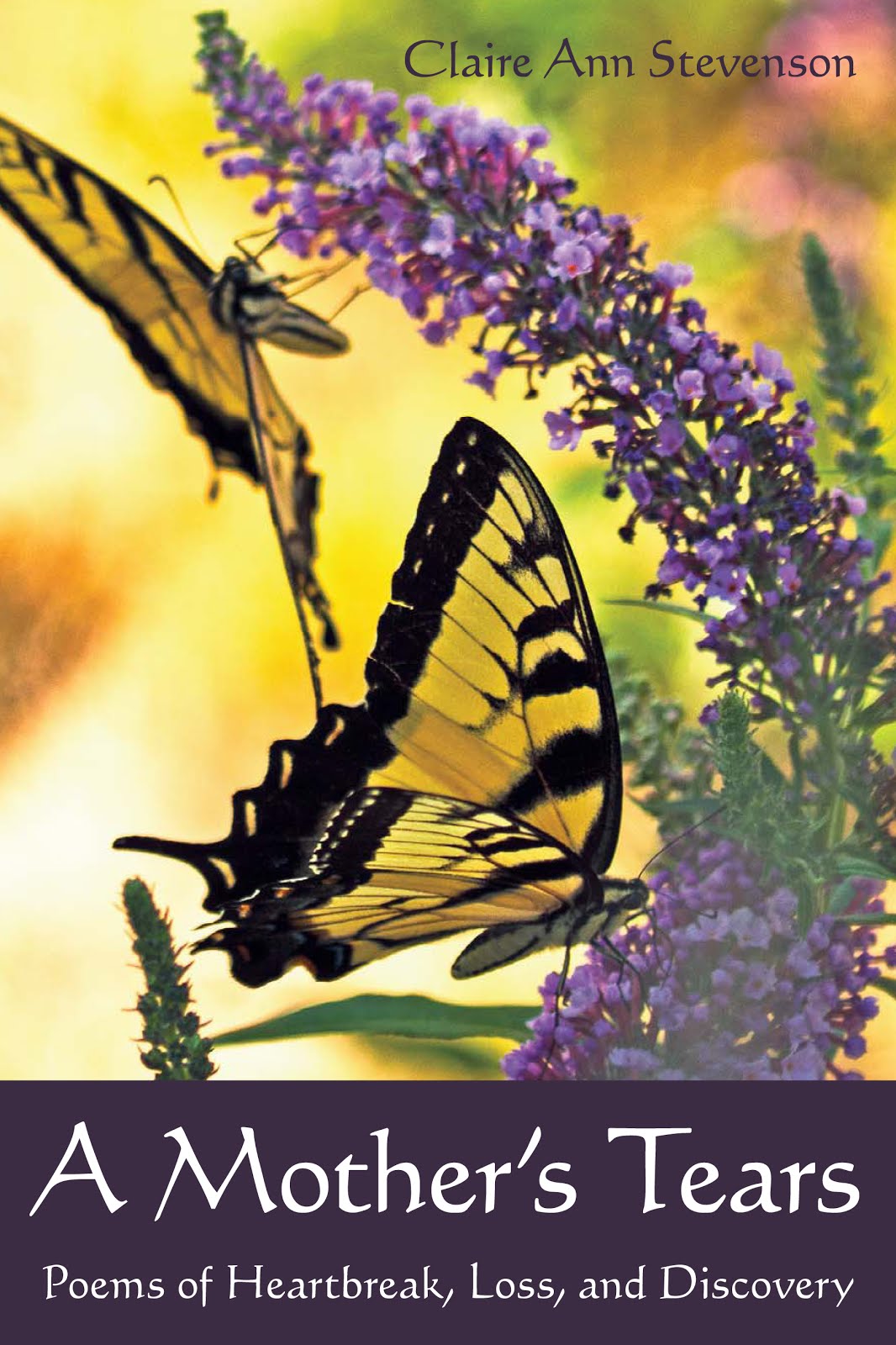